If you have attended a Nantucket High School basketball or football game over the past two decades, it is very likely your ears are familiar with the boisterous and distinct cheering of Fernella Phillips. The mother of Whalers who have graduated from the local high school has been a fixture at many events that support Nantucket’s youths. “I love to support the kids,” she stated, as she talked about her favorite recreational pastimes on island. Laughing, Fernella joked, “I make a lot of noise and they [athletes and audience] love to hear my big mouth” at home games. There was a sense that she embraces the responsibilities of a sideline parental cheerleader. 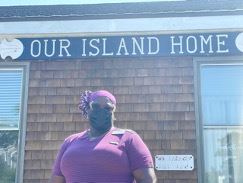 Off the sidelines, Fernella Phillips is the Dietary Aide and Receiving Clerk at Our Island Home. Our Island Home is a town operated skilled nursing home facility and Fernella has worked there for over twenty years. Before being prompted to talk about her work, Fernella stated, “I love my job and take pride in my work,” which was quickly followed by, “If I didn’t love it, I wouldn’t be here for twenty-one years.”

As the Dietary Aide and Receiving Clerk some of Fernella’s responsibilities includes keeping the dining room and kitchen clean, receiving shipments of groceries, corroborating orders, organizing and accounting for kitchen tools and supplies, proper storage of perishable goods, and more. Asked to talk about her team within the Island Home, Fernella used terms such as “good communication” and “smooth” to describe how the kitchen team operates well and shared that their comradery occasionally produces “a lot of laughter.” As she puts it, “I think the kitchen is the best because we get along. I love working with the kitchen team. We have a lot of good communication with each other and my boss is a very sweet person, she knows how to communicate with us and she tries to make things better for us.”

Even though Fernella expressed that teamwork is the kitchen team and Island Home’s best workplace attribute, she still hinted that morale could be improved throughout this town department. Fernella also suggested that employees’ inputs could be more valued before, during, and after introducing new rules, programs, or tools in the workplace. For example, Fernella shared a story about how a new type of mop for cleaning was bought for the kitchen but explained that “it didn’t really work.” Here is how Fernella explained the new mop situation, which gives a sense of her appreciation for her job and illustrates that she knows how to do her work well. “For instance, once they brought in a thing like an electric mop, but it didn’t get the corners, it didn’t do nothing. We still had to get the [regular] mop to rub where the [new]
mop missed.”

There is no doubt Fernella loves her work and she is clearly embedded in the Nantucket community. Like many immigrant stories, it was the opportunity for employment that brought Fernella to Nantucket in the first place, back in 1988 when she was encouraged to visit by her mother, who was then a chamber maid for an island inn. Fernella’s journey to Nantucket started in Trinidad & Tobago, her country of origin. She moved her family to Puerto Rico where she lived for a while and eventually moved to Philadelphia for work. After learning about Nantucket, Fernella primarily worked in hospitality on island, going “back and forth, back and forth” to see her family still in Puerto Rico. 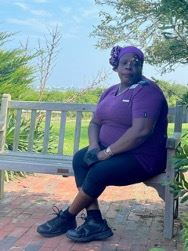 After a couple seasonal employment stints, Fernella decided to move her family to Nantucket permanently. Prior to joining the Our Island Home staff, she worked at the Harbor House for fifteen years and at the Jared Coffin House for ten years, concurrently. Fernella shared many positive stories about her experiences on island, but not all recollections shared were of milk and honey. Memories of what she still considers injustice enacted upon her family by members of the community still upsets her and moved her to tears in the interview.

One of her many hopes for the DEI Office is that it finds ways to “have conversations to get impressions and opinions to make the island a better place for everyone,” she stated. Fernella wants the DEI Office to “try and make things different. You know, put things in perspective,” for town employees and the community to have shared understandings on the many social aspects that impacts quality of life on island, such as having conversations on race, the dignity of work, and how to increase attendance at high school sporting events.

Prior to concluding the interview Fernella was asked: What makes Nantucket special? Before the last syllable of the last word in the question was enunciated, Fernella responded with one word at lighting speed, “daffodil!” She elaborated on how she missed out on Daffodil Festivals when she first moved to the island because she was always working, but recently she has come to enjoy the socialness of the annual celebration. At the end of the interview, Fernella was also asked to provide three adjectives or phrases that best describe Nantucket, she replied, “beautiful,” “kid friendly,” and “pride,” the last of which referred to her passion for Nantucket’s Whalers. “Our teams face the challenge, win or lose, we have pride,” she explained.

When asked for any final comment, Fernella closed the interview by expressing gratitude for the opportunity to participate and talked about how togetherness is the secret sauce that makes Our Island Home run smoothly. “This is what the Island Home is all about, teamwork, show love, and working together,” so that residents will continue receiving topnotch care. So, the next time you’re attending a high school game or visiting loved ones at Our Island Home, be sure to listen for Fernella, she welcomes and relishes opportunities to catch up with members of her community.