Throughout the latter half of 2021 and to present, a number of “Erosion Monitoring Stations” were established as part of the Shoreline Change monitoring project outlined in Recommendation 1-8 of the Town’s Coastal Resilience Plan at various points across the island – mostly along the south shore. The southern side of Nantucket historically has experienced a higher rate of erosion than other areas. Erosion rates along the south shore as calculated by MORIS (Massachusetts Ocean Resource Information System) range from average losses in excess of 12.63 ft per year to less than .56 ft per year, with the majority of shoreline change averages lying somewhere in the middle. 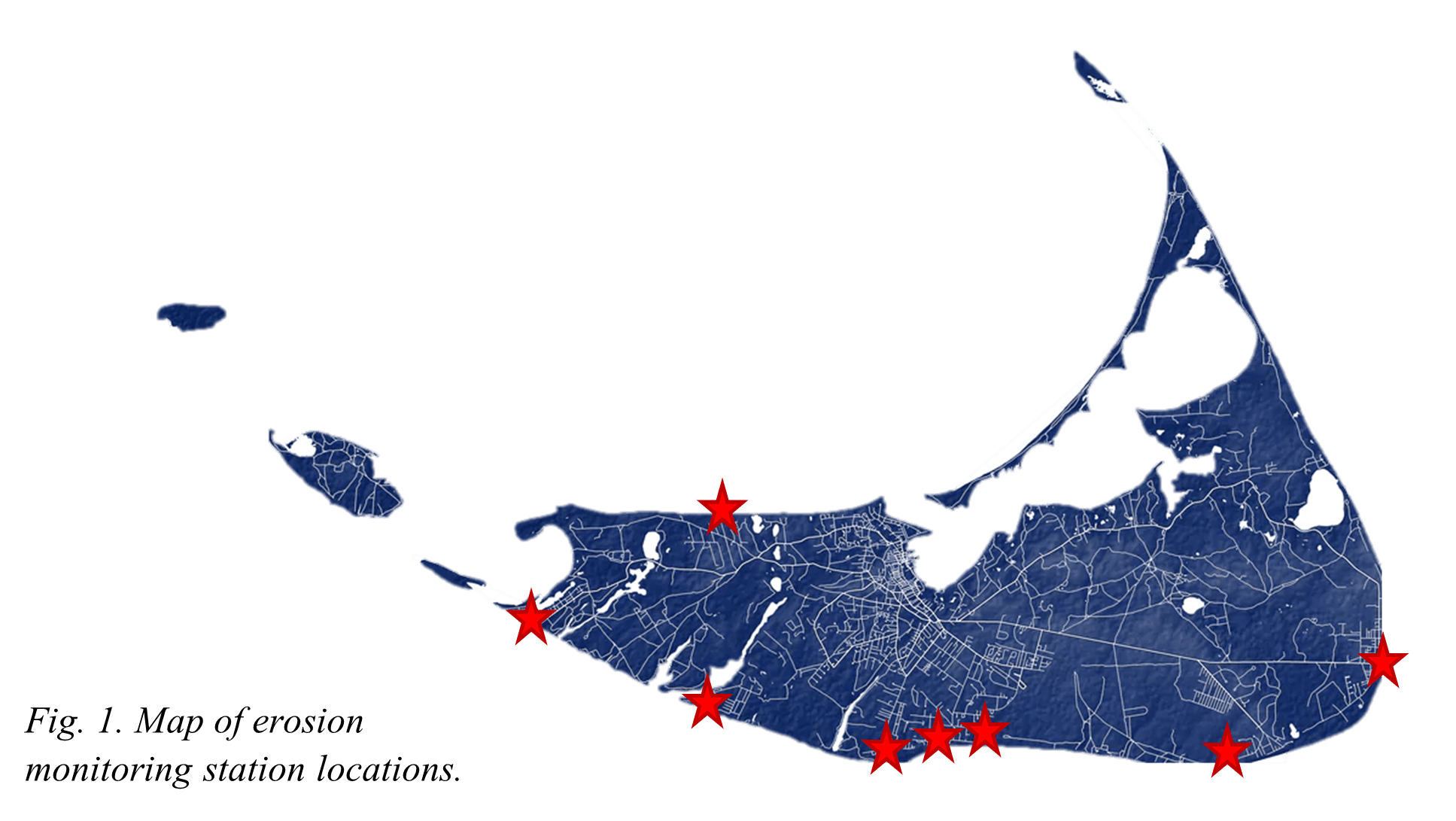 Nantucket’s beaches typically experience cyclical periods of accretion and erosion. During the harsh winter months, strong storms and high winds pull sand away from beaches and drive wind and water toward shore, eroding the beach and potentially the coastal bank or dune. In calmer summer months, sand accretes, beaches build back up, and the banks and dunes generally remain stable. In many locations around the island, large chunks of land are eroding at a significantly higher rate than they can build back up, leading to consistent annual losses. The effects of wind and water action have consequences for the coastal bank, which, unlike a beach or coastal dune, cannot be quickly rebuilt. Critical infrastructure and publicly used facilities such as the Town Wastewater Treatment Plant (henceforth referred to as the sewer beds) and the island’s only airport are located close to the south shore, so it was decided that the project would begin on this side of the island and expand to other locations from there. Currently there are stations at eight different locations around the island: Madaket, Tom Nevers, the sewer beds, airport, Nonantum Ave, Codfish Park, Hummock Pond Road, and Dionis beach (Figure 1).

The erosion monitoring stations were placed on Town-owned property and, with permission, on land owned by local conservation groups, including Nantucket Land Bank. Stations as illustrated in figure 2 consist of a series of stakes placed in a line perpendicular to the shoreline, aligned with methods used by the Massachusetts Office of Coastal Zone Management (CZM) for shoreline change transects. A zero point was established at each station for the coastal bank or bluff as it was on the date that the monitoring station was installed. Markers are placed at 20 foot intervals except for areas where there is limited space, in which case markers are placed at varying distances as outlined in each station map. Two or more points are used at all sites in the event one is lost to erosion or vandalized, to add redundancy. The location of each transect line was selected to provide a good representation of the erosion rate in a given area, considering factors specific to each site such as heavy foot or vehicle traffic, vegetation, or weakened spots along banks or bluffs. Each measurement is taken to the nearest foot – NRD is in the process of acquiring a survey-level GPS that will provide more accurate measurements and possibly include elevation data. 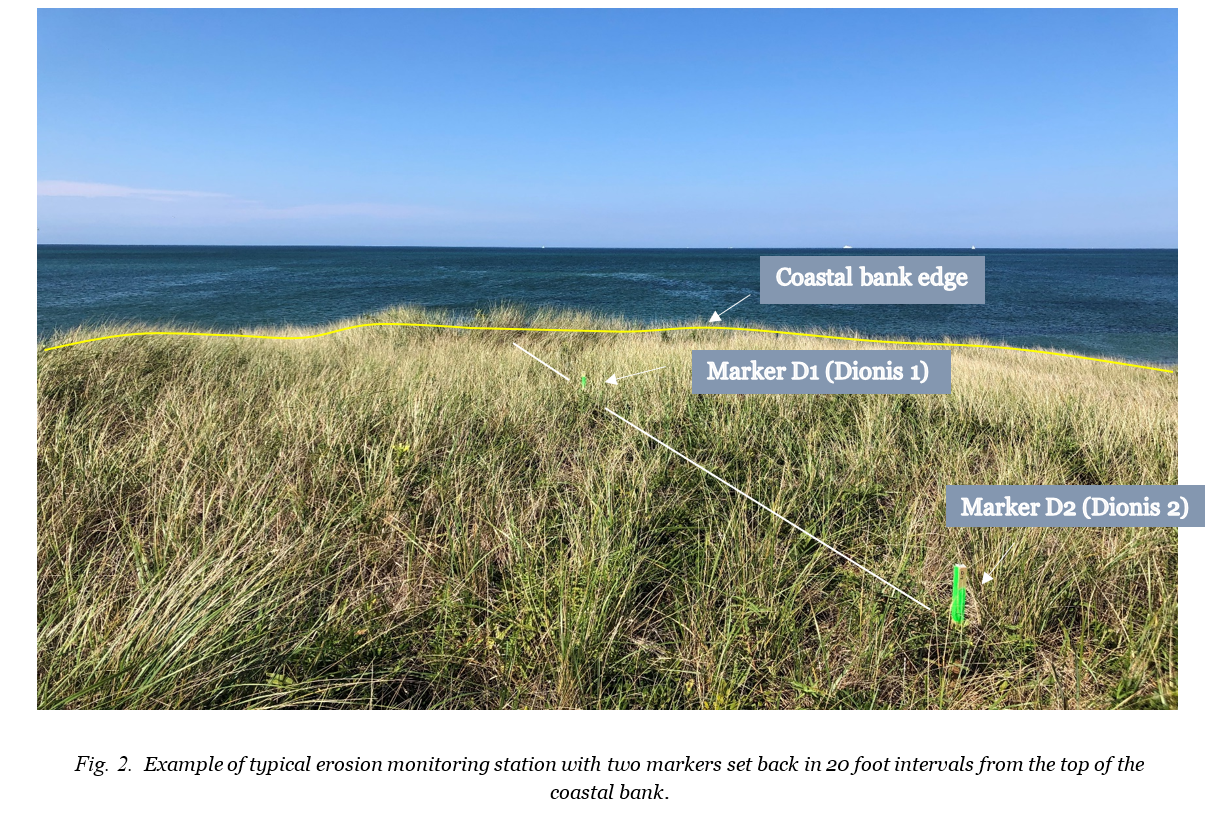 The first stations were established at the end of Nonantum Ave and at Tom Nevers field and parking lot on 11/30/21. A group of three stations were installed at the sewer beds on 12/8/21, followed by two stations at Madaket and three at the airport on 2/2/22. Dionis and Codfish Park were established on 8/27/22. Most recently a station was erected at the end of Hummock Pond Road on 11/8/22. The rate of change at most locations has been relatively low thus far. The greatest loss has been recorded at the sewer beds with an average total loss of 38 feet of dune in the area (Table 1-3). Measurements continue to be undertaken periodically and counted to the nearest foot to collect baseline data on erosion over time. In addition, pre- and post-storm measurements are taken where practicable and when safe conditions permit.

Some areas have shown little to no changes to the shoreline at all. At the time of posting, the bluffs of Tom Nevers, Codfish Park, and the airport have not lost any ground since their respective installments, and the dune in front of Nonantum Ave has had small but steady loss in increments of 1 and 2 feet. Although only active for a short time, Dionis has also lost 1 foot of bank since its installment on 8/26/22. Regular measuring will continue for both older and newly installed monitoring stations.

The information collected from the Shoreline Change Monitoring Project will be used to inform related coastal projects in the future and to better understand erosion rates within localized areas. It will also give a clear understanding on the risks each study area faces and where to best direct efforts and funds. Collecting accurate, relevant information is also relevant to improving the Town’s position to receive grant money for coastal projects and studies. Results could also be used to inform other Coastal Resilience efforts and recommendations from the CRP such as the Strategic Retreat and Relocation Program and to support the need for the various dune building and beach nourishment projects.