Controlled spawns and larval release of Nantucket Bay Scallops.
Conducted weekly spawns of native stock to spawn in the hatchery setting. Nantucket Bay Scallops are conditioned and triggered to spawn with the spat collected. After holding the resulting larvae for 10-14 days it is released into areas deemed suitable habitat. The habitat is evaluated by underwater surveys completed by Natural Resources Department staff. To date this field season the hatchery has produced 50 million larvae.

Cages have been deployed in close proximity to one another in areas in the Head of the Harbor. The goal of this project is to increase the density of scallops in certain areas to help maximize breeding success of the native populations.

Spat bags have been deployed in areas around the harbor to help measure the amount of Nantucket Bay Scallop larvae throughout the harbor. The larvae can swim in attached to the material inside and are then unable to swim out after they have grown. Spat bags are collected bi-weekly through out the season.

In the summer of 2015 the Natural Resources Department worked with Charles Costello of MassDEP to map all of the eelgrass resources within Nantucket and Madaket Harbors. Final ground checking is scheduled to take place the last two weeks of September. We hope to have a final map and report available for use by the end of the year. This report can be taken and repeated by NRD in the future to keep updating the map to see how the eelgrass is changing from year to year.

In conjunction with the Shell Recycling Program the Natural Resources Department began its proof of concept trials for spawning oysters and getting them to set on the recycled shell collected from local restaurants. The oyster larvae and shell bags are being held at the hatchery to measure growth and settling rates. This information is necessary as we look to permit the greater oyster reef restoration project.

In a collaboration spearheaded by local commercial fisherman Carl Sjolund, NRD partnered with Madaket Admiralty Association, Nantucket Shellfish Association, Nantucket Land Council, and the Madaket Conservation Association to place 180,000 quahog seed within Nantucket and Madaket Harbors for recreational use when they reach harvestable size. This is the first year of what is designed to be a three year project. 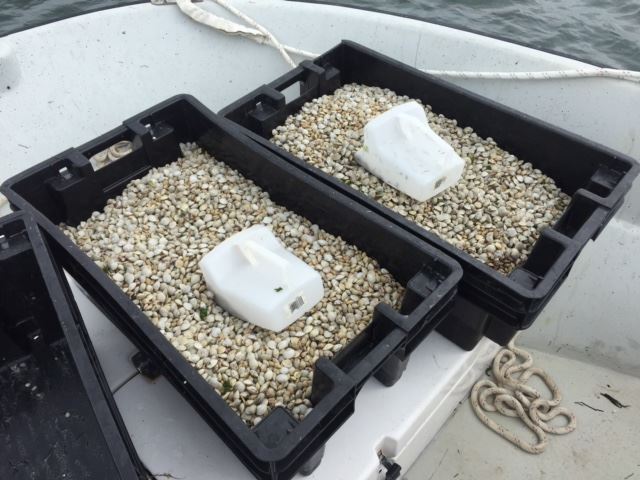